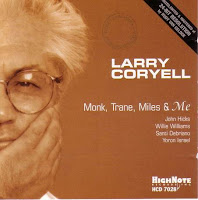 One fine summer evening many years ago, I paid a call on a young lady.  James Taylor was scheduled to perform in Memphis and she graciously agreed to accompany me to that event.  Taylor was splendid.  His encore was ‘Fire and Rain’.  She grabbed my arm as he began to sing.  More than thirty years and two splendid children later, she is still holding on.  God has been good to me.
As it so happens, Taylor’s warm up act was Larry Coryell.  I was already a big fan of that jazz guitar master.  Listening to him up on the stage all by himself was a special treat, even if I hadn’t been holding on to the love of my life.
I just downloaded a recent Coryell album: Monk, Trane, Miles, & Me.  It’s very different from the Coryell recordings I listened to back then.  He was big into solo and duo music.  I have an LP of his with Philip Catherine that I wish I could get on my iPod.  The recent album is much more traditional.  The small group form continues its gravitational pull.  Here is the lineup:
I am playing the Monk piece ‘Trinkle Tinkle’ and 'All Blues'.  This is quite convincing.  Coryell is a real jazz story.  Give this one a few of your hard earned dollars.  The investment will pay off.

Posted by Ken Blanchard at 2:21 AM No comments: Links to this post


I loaded one of my Vandermark 5 recordings into my car’s player the other day.  I have been grooving to it over short trips ever since.  The Color of Memory is one of those spectacular jazz recordings that very few people will ever hear, or so is my guess.
Ken Vandermark may be the single best sax player in the business.  He is completely fearless.  His recordings make no compromises.  One number will be very accessible while the next will be in the Twilight Zone.  He incorporates themes from every conceivable genre, yet keeps a blues/jazz bass always at hand.  I am a big fan.
I have been playing ‘Vehicle’ for some time.  I have added ‘Chance’.  Enjoy.
Posted by Ken Blanchard at 1:29 AM No comments: Links to this post

Wayne Shorter Without A Net 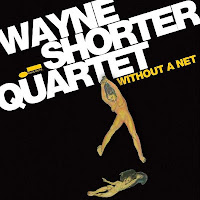 Wayne Shorter has a new album, his first for Blue Note in 43 years.  I have a very special place in my heart for Shorter.  When I first began collecting jazz a few years back, his work was one of my areas of concentration.  I still think his Blue Note recordings (Speak No Evil and Juju come to mind) were examples of pure genius.
Without A Net is more than one could hope for.  Here is the band:

It is no surprise that the recording is getting a lot of laudatory reviews.  Shorter is, if not a jazz god, at least a jazz demi-god.  Shorter will turn 80 this year, if my math is correct.  It is nothing short of astonishing that he plays with so much energy and imagination.  Shorter is playing soprano sax on the album as he did on some of cuts from the 1969 European recordings with Miles Davis.  Here, however, he has a very different sound.
I think that his playing is eerily reminiscent of Steve Lacy, especially on the first cut.  There is surely nothing here that would be familiar to anyone who knows his work for Blue Note or his history with Art Blakey and Miles, let alone his fusion period.  Shorter is doing something original here.  One could only wish to get more of it.
I am playing ‘Orbits’ and ‘Starry Night’.  I am also playing ‘Fee-Fi-Fo-Fum’ from Speak No Evil, and ‘Mahjong’ from Juju.
Posted by Ken Blanchard at 1:12 AM No comments: Links to this post 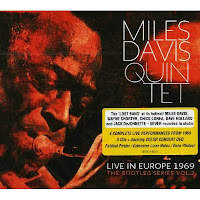 Miles Davis Quintet: Live in Europe 1969 (The Bootleg Series Vol. 2).  This box set is one of the most valuable documents to emerge from jazz vaults since the advent of the compact disc.  The Quintet is as follows:

Wayne Shorter, of course, returns from Miles’ second great quintet.  The rest of the band is new.  They never recorded in the studio, something Miles apparently regretted.  I believe this is the first official release of their music.  It would be enough to get three CDs and a DVD of new music from a Davis quintet to make this a red letter occasion.
However, this is also priceless as a document of the last big turn in Miles’ career.  ‘Bitches Brew’ appears twice in the collection.  The Dark Magus is about to emerge, leaving jazz rather behind in my view.  In this collection, however, Miles and his crew are still firmly in the template that was established with the Plugged Nickel recordings in 1965.  This is genuine jazz in anyone’s book.
Like The Bootleg Series Vol. 1, the music is pensive yet intense.  It presents a series of solos mostly unmoored from any central melody.  Also like Vol. 1, it is not nearly as laconic as the Plugged Nickel sessions.  If anything, these recordings are a step away from avant garde.
However, the third quintet, if one may call it that, clearly displays the fusionesque elements that show where Miles is going in 1969.  Having Shorter play soprano feeds this impression.  Most of all, the inclusion of Chick Corea on electric piano gives several of the numbers a Return to Forever touch.
I am not as ready as I once was to agree with Stanley Crouch about Bitches Brew.  Crouch, a brilliant jazz critic, thought that Miles’ recordings after 69 were just an example of sellout.  I am still making up my mind after all these years.  I will say that I wish we had a few more years and some studio recordings of this last jazz quintet.  Holland and DeJohnette are consummate jazz men.  Miles could have molded this group into as powerful an instrument as his first two quintets, if he hadn’t decided to go in a different direction.
Judged on its own merits, the Bootleg Series Vol. 2 is a marvelous collection of music.  I am playing:

Posted by Ken Blanchard at 12:29 AM 2 comments: Links to this post 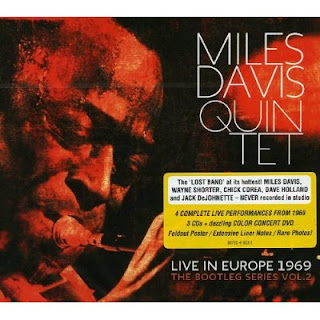 This blog's masthead puts Miles Davis at the center of genius in modern music.  I hold to that in spite of the fact that my collection of Miles' is very incomplete.  I have only a little of his work after 1969.  That was the point that Miles decided to strike out on a new course.

I have a lot of his work from the early fifties on.  Davis' fans are very lucky.  We have not only a fine body of studio work by his two "great" quintets, but very large box sets of live recordings.  I would suggest the following:
That is a powerful lot of live Miles Davis.  Fortunately, there is more.  Miles second quintet was well documented in the studio.  ESP is an essential album by what many consider the greatest small ensemble in the history of jazz.   The Plugged Nickel gives us the Second Quintet in a very pensive mood.  I love this collection.  However...

We have two recent collections of recordings made by Miles in Europe in the late sixties.  The Bootleg Series Vol. 1 features the second quintet:
I have just now acquired this box and I am in love.  I am playing 'Footprints' (a Wayne Shorter composition) and 'On Green Dolphin Street'.  It just doesn't get any better than this.  Enjoy.

The Bootleg Series Vol. 2 has just been released.  This was Miles' "third quintet" with Wayne Shorter, Chick Corea, Dave Holland, and Jack DeJohnette.  This group never recorded in the studio.  Miles regretted this.  Fortunately, some of their live dates in Europe were recorded.  I am waiting for the box to arrive in my mailbox.
Posted by Ken Blanchard at 1:34 AM No comments: Links to this post